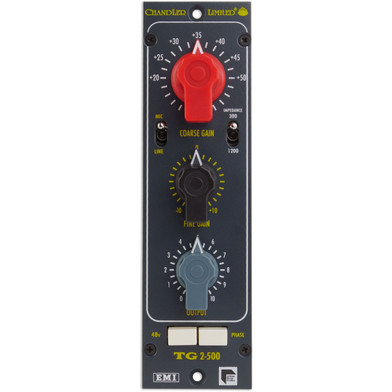 Building upon the popularity of the company’s acclaimed TG2 Pre Amp / DI, the new TG2-500 delivers the classic sound of the EMI TG12428 pre amp used in EMI/Abbey Road recording and mastering consoles in the late 60s and early 70s—in the company’s 500 series module form factor. Using the identical TG2 circuit, transistors, and transformers, the TG2-500 delivers 10 – 60 dB of gain and uses a coarse gain control and a fine gain control as found on EMI consoles. The unit provides 300 and 1200 Ohm input impedance as on the TG2, which the company’s customers have come to value. Equally important, the Chandler TG2-500 delivers frequency response identical to the TG2. Equally notable, the TG2-500 has the same high frequency bump and mid forward tone that users enjoy with the TG2, along with the warmth inducing distortion which contributes to its sound. The end result is a creamy, smooth tone with a surprisingly open, clear top end. The sound, as explained by many users, has the ‘warmth and punch’ of the Neve, but with a nicer, expanded top end.

Chandler Limited is the only company in the world authorized to develop, manufacture and market the “Official Equipment” of EMI/Abbey Road Studios.

STL Pro Audio is an authorised dealaer for Chandler Limited.